Into August, three biggest brands in polyethylene market all increase, and the range is from 100 to 250 RMB/ton. LLDPE in East China presents a trend of first increase and then callback; LDPE and HDPE show a periodic climbing trend. Among them, the increasing range of LDPE is the most apparent, and during early August, the whole range is 2.75%. The upstream maintains rigid purchase, and the overall transaction of spot market has improved, so the market of polyethylene pulls back to the increasing path. 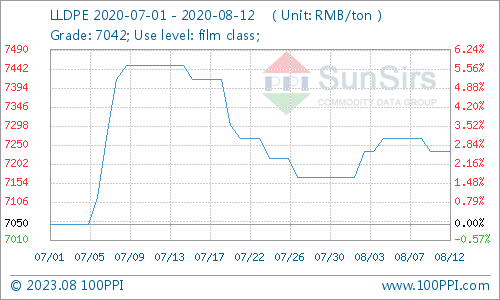 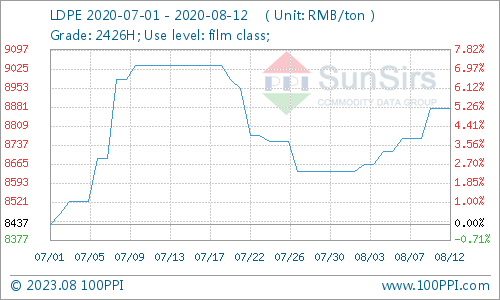 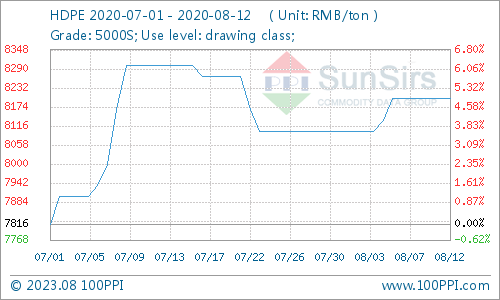 Early July, polyethylene continues June’s trend, rising sharply. The crude oil keeps fluctuating in a high level, supporting the market. The continual rise of linear futures really boosts the confidence of the market. In addition, the concentrating maintenance of petrochemical enterprise hasn’t ended, so the daily production of petrochemical remains a low level, and the burden of spot supply is not so heavy. The petrochemical enterprises adjusted the ex-factory price to be higher incessantly, and because the previous satin finish materials are cheap, so the increase of it is the most conspicuous, from 250 to 550 RMB/ton. The continual rising cost ramps up the market, so the traders’ attitudes are positive and they mainly follow the climbing trend.

Late July, the polyethylene lacks the motivation to increase continually, stepping into the declining way. In the second half of the month, with the reopening of ZHONGTIAN and SINOPEC SABIC, the operating rate rebounds, and the supply in the market increases from the previous period. At that time, the downstream is in off-season, and affected by social public hygiene events, the operating rate is low. Demands from the downstream is general, and the enthusiasm to market is not strong, and most purchase by small orders, replenishing by demands, so the supply is adequate. The dropping trend of Dalian futures are apparent, influencing the attitude of spot market. The ex-factory billing price of main area sales drops, and the market transaction is mainly low. The attitude of traders is general, following the declining trend.

Early August The Polyethylene Market Pulls Back to The Rising Trend

Entering August, due to less pressure on petrochemical sales at the beginning of the month, some regions raised ex-factory prices, boosting market mentality. Linear futures fluctuate higher, which is good for the market. During the period, crude oil increases gradually and brings certain support to the market. After the major regions raises prices, merchants follow up with the price increase, and the downstream just needs to get the goods, and the market transaction atmosphere is positive. The current port inventory remains in the low area, and the two barrels of oil inventory is also at a low level. In the short term, the market supply pressure is not strong. However, as the new equipment is planned to be put into production, and the later petrochemical equipment is overhauled, production will resume one after another, and the market supply is expected to increase.

The Upstream Ethylene Market Has Fallen Since August

The current international crude oil trend has limited support for the market. The raw material ethylene has fallen mainly, and linear futures have continued to float green, all of which are negative for the market. In addition, there are plans for new equipment to be put into production in August and with the completion of petrochemical equipment overhaul, market supply is expected to increase. If downstream demand is still insufficient to follow up, it may restrain the rise of the PE market. However, the current demand for agricultural film is improving, and port inventories and petrochemical inventories are at a low level. In the short term, favorable support is still there. Supply pressure is not large. It is expected that the PE market may maintain high fluctuations.

If you have any questions, please feel free to contact SunSirs with support@sunsirs.com

SunSirs: Farmers are Reluctant to Sell, and Chinese Domestic Soybeans Continue to Rise