According to SunSirs monitoring, the auction for temporary stored soybeans is functioning normally. The four auctions early this month were mightily hot, and the strike prices broke the record for many times, overtaking 5,500 RMB/ton, which stimulated the price of domestic soybeans to climb continually. The two auctions in the second half of the month saw a decline in transaction volume and successively failed auctions. In the last transaction, all failed. Due to the declining volume of temporary stored soybeans, the domestic soybeans fall weakly. At the beginning of this month, the average price of domestic soybeans market was 5,100 RMB/ton, while at the end of July, it is 5,253 RMB/ton, which increases by 3.01%. 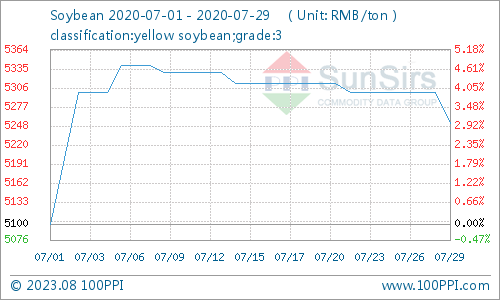 Temporary Stored Soybeans Goes Through Two Opposite Trend in July

On July 23, the fifth auction of temporary stored soybeans emerged the failure case for the first time. On the 29th, the sixth auctions failed all without any transaction. As the volume and price in temporary storage soybean auctions are both slumping, domestic soybean prices begin to fall.

Temporary Auction Presents A Depression, The Leeway for China Soybeans to Rise Is Limited

SunSirs agricultural analyst Libing deems that the strike price of temporary storage soybeans has fallen continually, and the passion from terminal protein factories to purchase has declined, so it can be estimated that the domestic soybeans will remain weak.

If you have any questions, please feel free to contact SunSirs with support@sunsirs.com.

SunSirs: The Price of China Domestic Fuel Oil 180CST was Firm on July 31